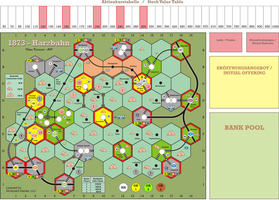 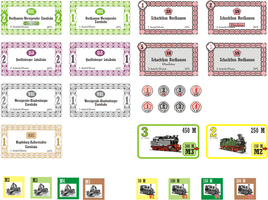 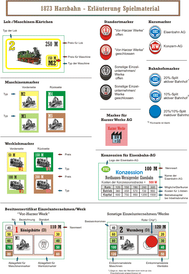 Harzbahn 1873 is different from the other 18xx games. In addition to the railway corporations of the Harz area the industrial companies (merely mines) are represented in the game. At the start of the game 15 mines will be auctioned among the players. The mines act similar to the minor companies in other 18xx games. They start with basic equipment which is referred to as machines. During the course of the game the mine owners try to improve their equipment as the income of the mines depends on the type of machine they own. Although it is important that the mine location is connected to the railway network as this is an important factor for the development of the mines. Therefore the mines are able to build some track. At some time during the game the mine owners are forced by the technical development either to convert their private mine companies into a mine corporation or merge them with a mine corporation. If both option are not possible or not sensible they may simply close the mine.

concessions enter the game one after another in a given order. As in other 18xx games a railway corporation will only float after a certain number of its shares have been bought by the players. But then there is something new! The floated railway corporation will build its concession route completely during its first turn in the operating round. That may be between 1 to 5 hexes. However this is easier said than done, as track building in the Harz area is very expensive as the Harz is a mountainous area! The buyer of a concession must take this into account when he sets the starting value of the certificates in order to have enough money left after the payment for the track lay which he can use to buy trains and build stations. Thereafter the next surprise starts when running the trains. The type of a train does not define its maximum route length but the number of separate routes it can run during one operating turn! For example: a type 3 train may run 3 separate routes. However the length of each route is limited by the available tracks and other restrictions. Nevertheless the income per operating round is quite high but this is necessary due to the high track building costs and the high prices for the trains.

Due to so many new game elements there is not only a comprehensive rule book but also a players guide with game play examples and strategy hints.

Harzbahn 1873 is a unique game and should be included in every 18xx-game collection.