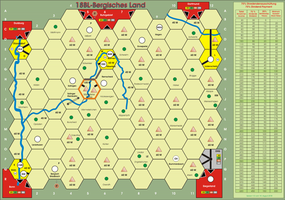 local population, many of whom had had little exposure to such state-of-the-art engineering work. The bridge's official inauguration celebration took place on 15 July 1897. It is still in use after more than 120 years of existence!

The game is a mixture of elements of 1830 and 1835 plus some unique features. At first the 6 private companies will be auctioned among the players. All of the privates have a special function which can be used by the railway corporation which purchased them. The railway corporations receive only the money for their certificates sold to the players. Dividend for certificates in the Initial Offering remain with the bank, dividends for the certificates in the Bank Pool are paid into the companies’ treasury.

In addition to the normal trains there are rail busses which are available from the green phase onwards. The latter cost less than the trains but they generate also less income. Their routes may include one city only while the other stops are towns. They cannot run to the red off-map connections.  However there are a limited number of trailers which can be used together with the rail busses and will double the income of towns included in routes of the rail busses.

When paying dividends the director of a railway corporation can choose between 100% and 75% pay-out. In the latter case the remaining 25% will go to the corporation’s treasury. The stock value may even increase with a 75% dividend when the total payment is one and a half time the value of the current stock value.

The Bergisches Land is a low mountain range region east of the Rhine river and south of the Ruhr area. The region became famous during the period of its early in-dustrialization in the 19th century. At that time Wupper Valley was a historical Silicon Valley. Its twin cities Barmen and Elberfeld were the trading- and industrial capitals of Prussia at that time. The industrial growth led to the construction of several railway companies in this area. The first one was the Deilthaler Eisenbahngesellschaft which started in 1831 with the transport of coal from Essen to Vohwinkel. The second one was the Düsseldorf-Elberfelder Eisenbahn starting operation in 1838. The initial purpose of this railway was the transport of raw materials from the Düsseldorf river port to the manufactories in Elberfeld.

Another milestone of railway history in this region was the construction of the Müng-stener Bridge, the highest railway bridge in Germany. The bridge is 107 meters high and spans the valley of the Wupper River, connecting the industrial cities of Remscheid and Solingen. The bridge was a masterpiece of Victorian-era engineering. For its time, it was a highly sophisticated structure. It astonished the